I Left My Heart in Tromsø

Norway is a country with a lot of beautiful and stunning natural views. Fortunately, I had a chance to visit this country last October, but only in one week. Bergen and Tromsø are the first came in my mind back then, so I preferred to stay three days in Bergen, three days in Tromsø and bonus one day in Oslo. Indeed, one week in Norway is not enough, I wish I could spend more weeks (or even more months) if time and money are no issue. Svalbard, Ålesund, Alta, Bodø, Lofoten and many more cities in Norway I really want to explore.

Tromsø is a small city located in Arctic Circle that’ll steal your heart. Surrounded by the wilderness of fjords and mountains on every side Tromsø is wonderful place to witness some of nature’s wonders such as the magnificent Northern Lights! Beside its beautiful landscape, you’ll get unforgetable natural experience. If you come in summer you’ll discover a midnight sun, if you come in winter you’ll witness polar night and magical northern lights.

Tromsø has always had to compete with Bergen when it comes to my pick for the best city in Norway, but something about this most recent trip I had, Tromsø finally win my heart. I visited this city last autumn and I could witnessing the magical northern lights (you could see this phenomenon in September – April), a very breathtaking moment for me. Not only northern lights, the landscape and surrounding in Tromsø is really beautiful that makes you want to stay here forever.

Polaria building is designed to mimic ice floes pressed against the land by rough seas. Located just a few minutes’ walk from central Tromsø, this museum dedicated to everything to do with the Arctic, including an extensive installation showing how climate change is having an irreversible effect on the glaciers and Arctic wildlife, as well as a film about the aurora borealis (northern lights). Polaria also a and home to an Arctic Aquarium, which features resident bearded seals and several species of Arctic fish.

Inside an old customs house, Polar Museum is a good place o learn about the area’s long history, from its discovery and first settlements to the whaling industry, which once flourished here, and its eventual transformation into a central Arctic research base. 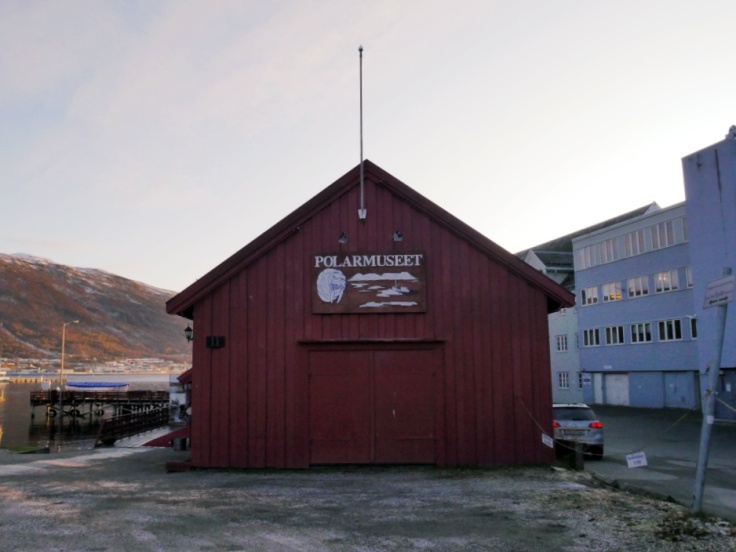 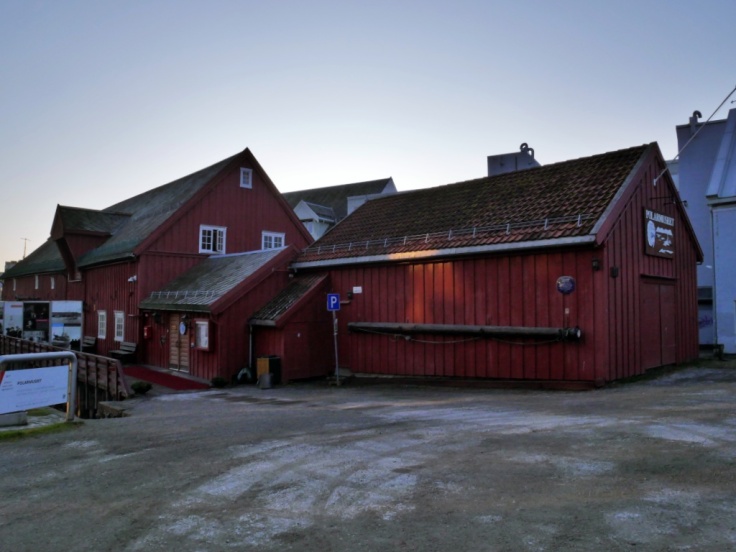 Tromsø Port located in the city center and you won’t deny to visit this port. From there, you will get very nice views of the Arctic Cathedral, Tromsø Bridge, and Mount Fløya. 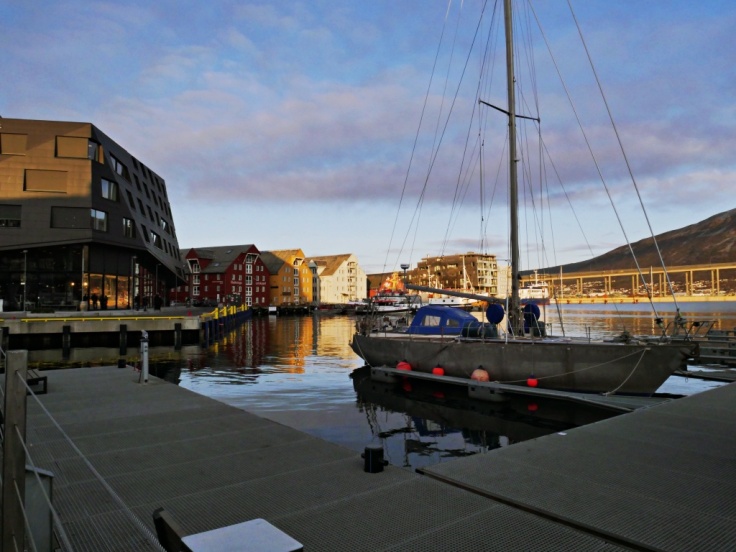 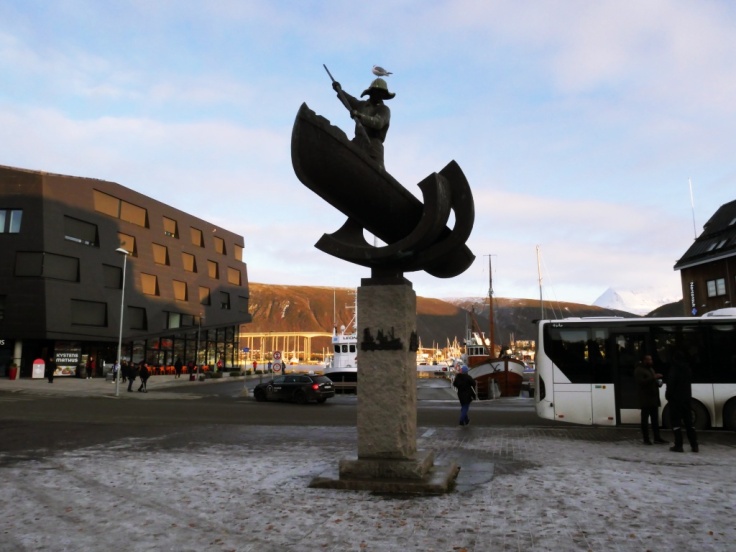 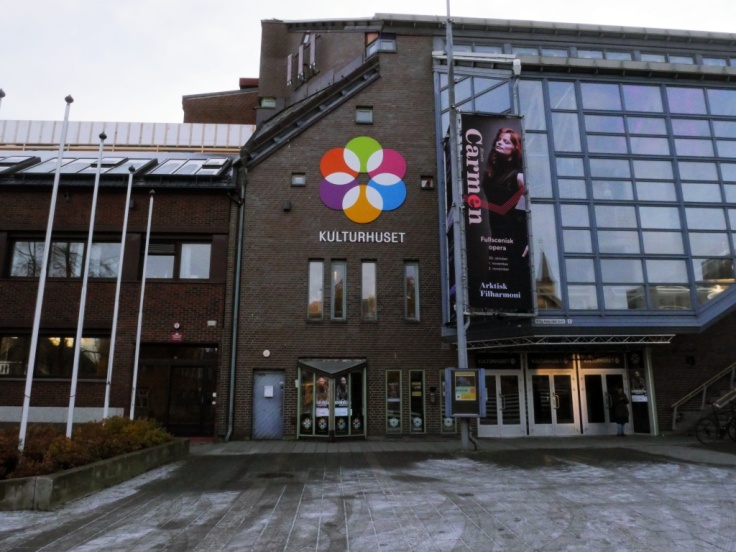 After visiting Torget, you should walk along Storgata, as this street is full of hotels, restaurants, and shops. When walking through this street, you can`t miss the Northernmost Protestant cathedral called Domkirka (Tromsø Cathedral). This old and beautiful wooden cathedral is the work of Christian Heinrich Grosch, built in 1861 in a neo-Gothic style and this is the only one in Norway that is made of wood. 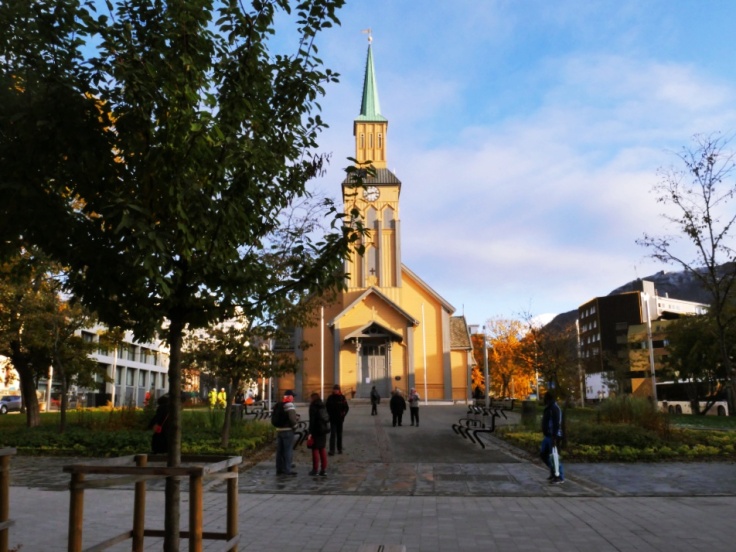 Tromsø Bridge is Norway’s first cantilever bridge at just over one kilometre. It crosses the Tromsøysundet strait between Tromsdalen on the mainland and the island of Tromsøya. This bridge has been protected by the Directorate for Cultural Heritage since 2000, the modifications to it are prohibited. If you want to cross Tromsø bridge from city center, you can go there by bus and it’s useful to get to know the bus system. If you’re on foot, take the pedestrian path for one of the best views of Tromsdalstinden with the magisterial Arctic Cathedral in the foreground.

The Arctic Cathedral, or Ishavkatedralen is an iconic landmark in Tromsø. It was built in 1965 and designed by a famous Norwegian architect called Jan Inge Hovig. The Cathedral has the shape of an iceberg and Sami tents and when it’s dark the strip lights between the frames gives the church a wonderful luminescence.  You can easily spot this Cathedral from city center or Tromsø port, but if you want to get there, you have to cross Tromsø Bridge by bus or walk (30 mins) with a beautiful view of the harbor and the city. 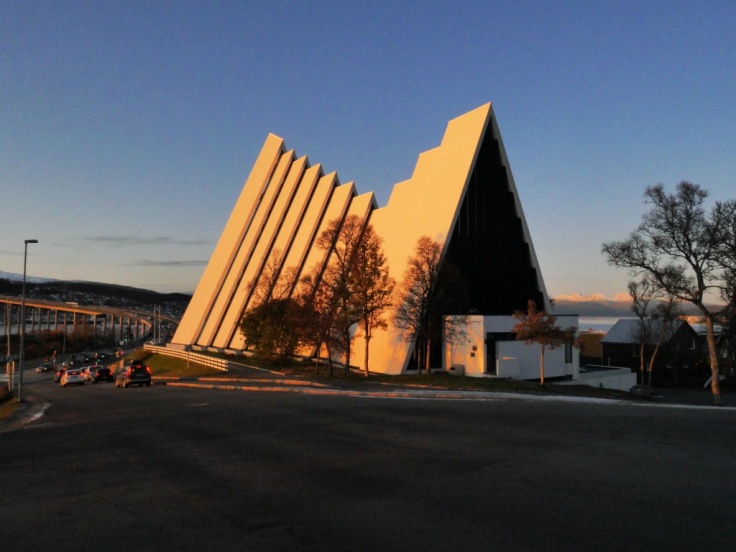 Run by the Tromsø University Museum, this is the world’s northernmost botanical garden and open from May to October. This garden has a variety of plants you may not have encountered before. Divided into 25 collections, each showcasing a different cold-weather species or region, including plants of the Himalayas, the Arctic, and other extreme climates, as well as traditional Norwegian plants.

Jumping to The Bus and Find a Gem

When you have no idea where to go, you should jump to a random city bus and get lost. If you do this, you’ll find a gem you never see in any travel blog, plus you’ll see nice and exciting sceneries from the bus. But before you do this, I recommend you to research the transport system in the area, so you’ll know how and which bus route to return to the place you start or your hotel (sometimes google maps didn’t help, especially in rural areas). 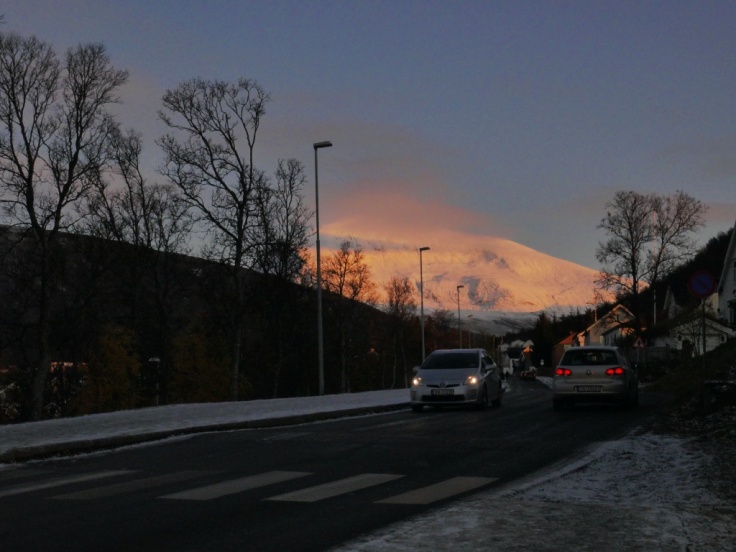 Tired because of too much walking and exploring city center, so I prefer to get on the bus which close to me. Sitting and seeing nice views from the bus really help me to release my tiredness. Get on, get off when finding nice place, take a pictures, get on another the bus again and so on. I found a beautiful frozen lake (I don’t know the name) when I did this and it’s the most exciting place I got. 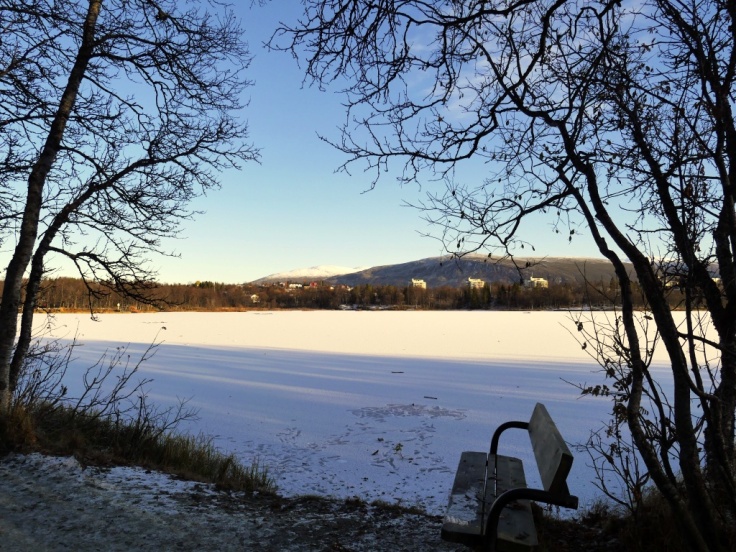 The cheaper way to see northern lights is find hotel/accomodation that not too close from the city center where there’s less or no light pollution. I prefer this way to see the northern lights, and lucky me, I had a chance witnessing this magical green lady. I stayed three nights at Sydpissen Hotel and luckily got two nights seeing northern lights from my room and from hotel backyard. 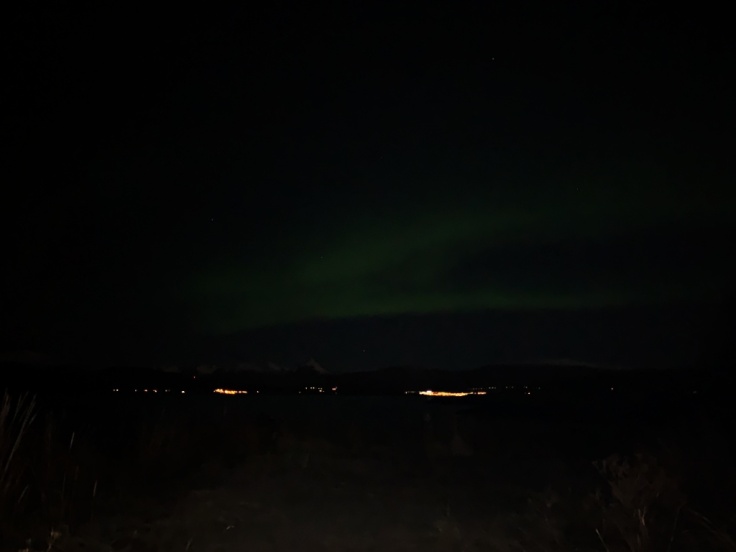 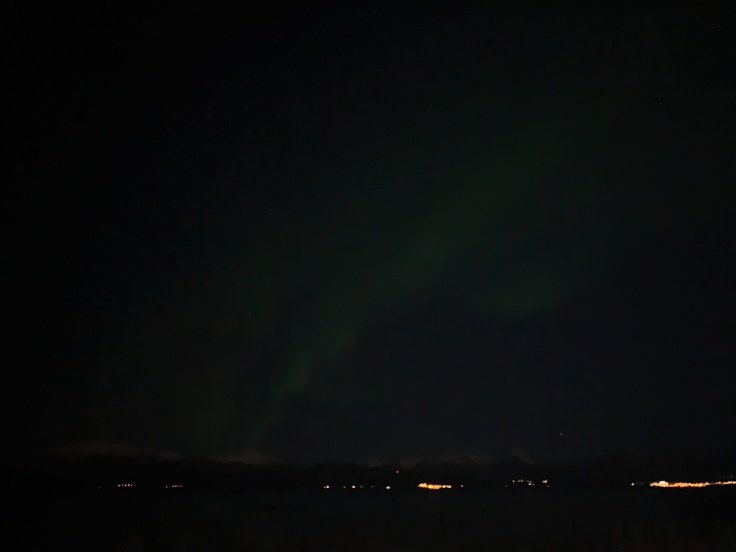 To help you predict when the northern lights will show up, you can check the forecast at https://www.norway-lights.com/#tromso. I visited Tromso in the mids of October as the forecast said that the chance is very big to see this amazing phenomenon. But again, this won’t guarantee you since it depends on the unpredictable weather. So, staying only one day in Tromsø is not enough, better to spend several days, unless you’re lucky.

Before you book your hotel, it’s better to know your hotel surrounding because it’ll be nice to explore it. When in Tromsø, I stayed in Sydpissen Hotel because it has nice surrounding and you can see northern lights from here because this place has less light pollution (not too close from city center). This hotel has nice backyard when you can see incredible views (sea, mountains and fjords) and the price per night also not too pricey, very worth the price. Although it isn’t too close from city center, it’s accessible by the bus in just 5-8 minutes to city center.

The best time exploring hotel surrounding is in the morning when the sun ready to rise. At my hotel backyard, there’s seaside with incredible view of mountains and fjords, I did morning walk there after I had breakfast. Walking through the shore will connect you to Telegrafbukta beach, a perfect place visit in Tromsø during summer. In winter, it’s also something special  to see the dock covered with snows. 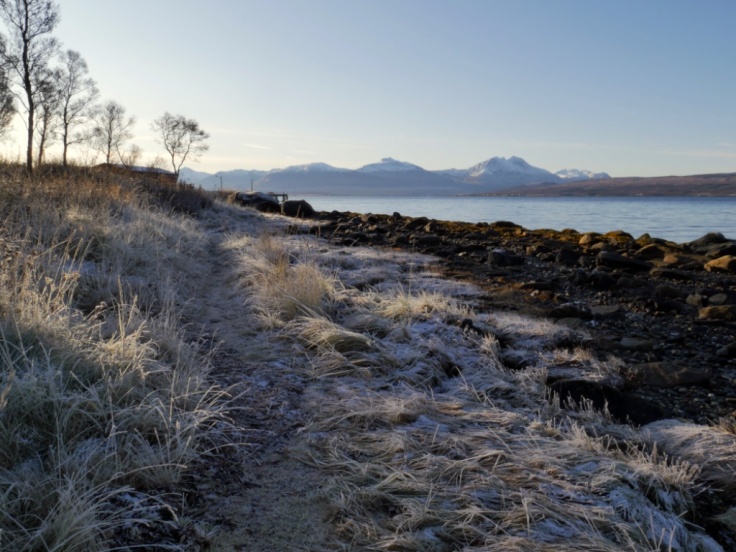 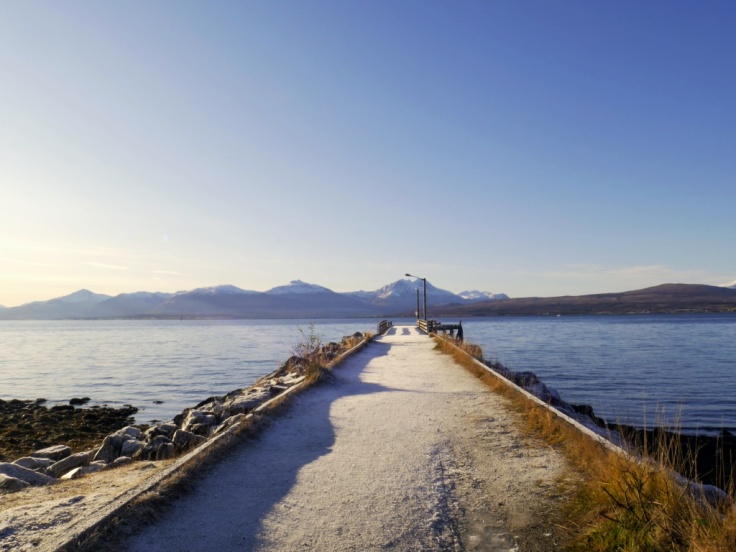 Across Telegrafbukta beach, you’ll find a path to Tromsø Museum. This path surround with pine trees that remind you of Norwegian Wood. A very nice morning walk back then while listening to Lo Fi Musics. 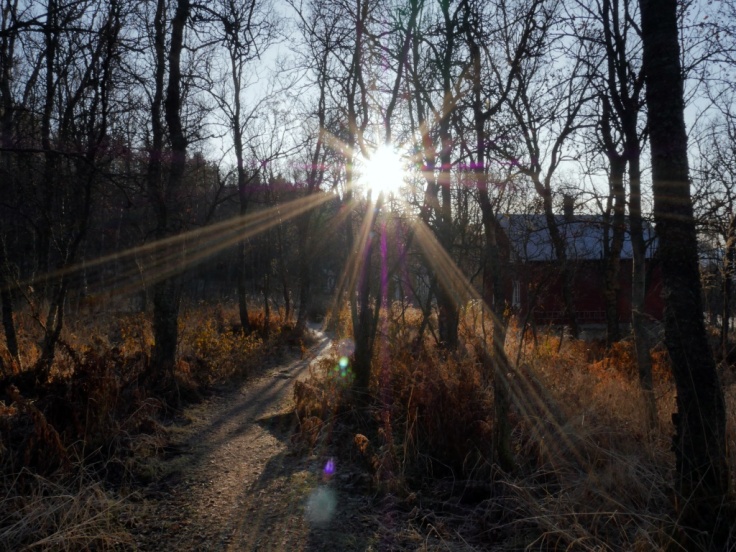 How it costs in Tromsø

The last but not least, here the costs summary from my three days trip in Tromsø as your reference :

Norway is a pretty much cashless society, it’s better for you to buy the bus ticket from this apps and show it to the driver when you enter the bus. This city bus also has the route from and to the airport. Maybe you’ll confuse where the bus stop is in the airport and just seeing the taxi line outside. The Bus Stop is located outside the basement. So, you need to go to the basement first and go outside from the basement, then you’ll find the sign of the bus stop.

The cheapest way to buy food anywhere in Norway is at a grocery store (Kiwi, Rimi, or Rema 1000). Fyi, if you want to buy food from convenience stores, you will experience higher price.

Well, to show you how beauty Tromsø is, Let’s see my 4 minutes video :

Have a nice trip 🙂