South Korea is a country where both technology and tradition coexist, you will see ancient temples beside skyscrapers, experience the hustle and bustle of the city life with the serenity of nature nearby. Apart from this uniqueness, this country become my destination to visit last May because of my interest in its pop culture, K-drama, K-food, skincare and so on. I really wanted to experience everything South Korea has to offer. As the first time I went to this country, I decided to visit Seoul and Busan.

Seoul is the capital city of South Korea, one of Asia’s metropolitan cities. Beside this fact, the reason I want to visit Seoul because this futuristic city still keeps its tradition side by side. So, take a look, below, the things I do in Seoul in three days.

One of the best things to do in Seoul is visiting the largest palace in Seoul, Gyeongbukgung Palace. This Palace spans quite a considerable amount of space and so it’s worth leaving a few hours to explore properly, especially if you love the history of Seoul. Don’t miss out on observing the Royal Guard Changing Ceremony or the Gwanghwamun Gate Guard-on-Duty Performance. Either one happens every hour between 10am to 4pm at the Gyeongbokgung Palace, every day except Tuesdays.

When visiting this palace, I recommend you to rent hanbok, a traditional Korean dress. You can walk around the palace with hanbok without look out of place. Also, if you are wearing this dress, you can enter the palace for free. You can find stores renting hanboks everywhere near the Gyeongbokgung Palace. It can be from 1.5 hours to a full day and the prices range between 5,000 to 15,000 KRW.

After the visiting Gyeongbokgung Palace, you can headed over to the traditional Bukchon Hanok Village because it’s so close to each other.It’s a great way to take a step back into time and see what South Korea would have been like centuries ago. This village is filled with traditional houses called hanok where people still live here. Some of these hanoks are used as cultural centers, restaurants, and guest houses so you can go inside and immerse yourself in the traditional Korean culture.

Namsan Seoul Tower or also known as N Seoul Tower is a nice place to visit If you want to catch a glimpse of Seoul’s skyline or breathtaking panorama of light shows. The multimedia projections and the amazing view of the Hangang River make the N Seoul Tower one of best things to do in Seoul. This tower also named Locks of Love, couples can leave behind tangible proof of their love round the tower’s base. This dedicated area witnesses couples with hopes of lasting relationships.

Myeongdong is known as most popular shopping hubs of Seoul. Walk along this shopping street to find everything from the latest Korean cosmetic trends to all kinds of clothes and shoes you can think of. If you’re a fan of Korean skincare and cosmetics, this is the best place to visit, there’re a lot of Korean brands open their shops in this area.

If shopping is not exactly your thing, it’s still worth to visit because there’re many restaurants and food stalls where you can find some great local dishes.

Dongdaemun Design Plaza (DDP) is a major development landmark built with a neofuturistic design that has become the city’s fashion hub. If you walk inside this Plaza where you will find the coolest and most unusual stuff such as a walkable park on the roof. This plaza also a venue for events, exhibitions and shows related to the design industry. Be sure to check whether there is anything happening in DDP that suits your interests.

Namiseom or Nami Island is a half-moon shaped island located about 63 km away from Seoul in Chuncheon, Gangwon Province. It’s one of the most popular destinations near Seoul that offers plenty of things to see and do. Featuring beautiful tree lanes, woodlands, riverside walks and many more, Nami Island offers picture-perfect scenery all year round. This island also famous when being featured in the 2002 hit drama, Winter Sonata, starred by Bae Yong-joon and Choi Ji-woo, you can find a statue of the main characters and a special photo zone for visitors to take pictures.

After visiting Nami island, you can visit Petite France, a French-themed village located about 25 minutes away from Nami Island station by the Gapyeong Tour Bus. The design of the village is modeled after the French novella, “The Little Prince”, written by Saint-Exupery. It was also one of the filming locations for the super-popular K-Drama: My Love from the Star starred by Jun Ji-hyun and Kim Soo-hyun. 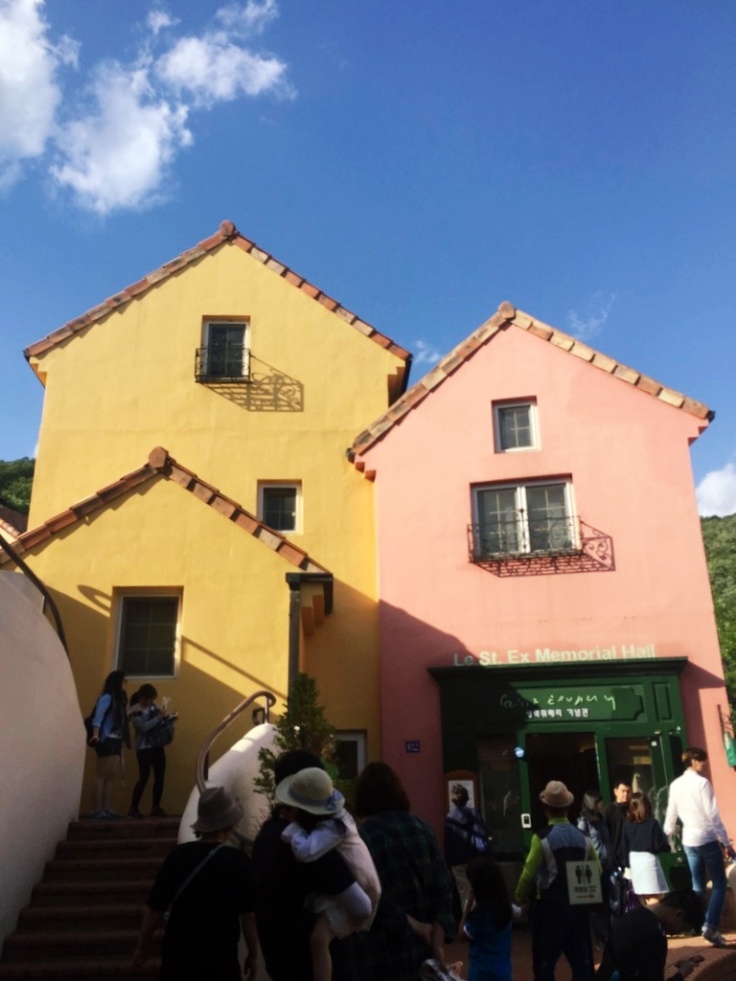 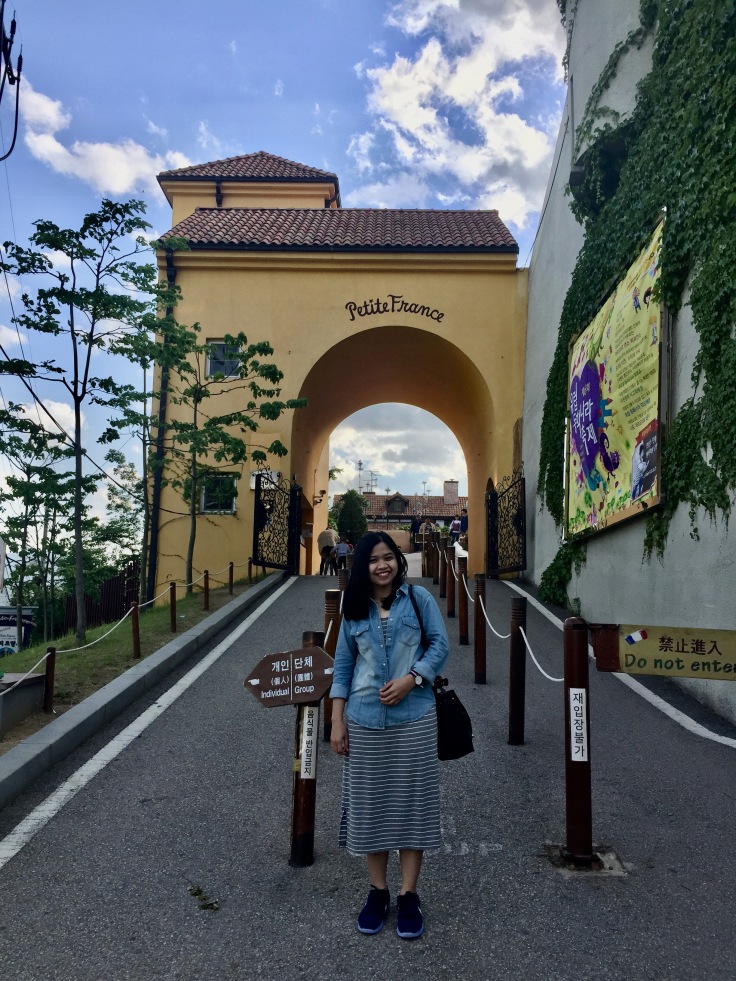 There are several alternative ways of traveling to Nami Island. You can drive there by yourself or take public transportation. If you take public transport, find the Korail counter in Seoul station to purchase a train ticket. Take the train to Gapyeong Station. You can also buy your ticket on Korails homepage if you want to save time. If you want take the cheaper way, take the subway to Sangbong Station. Transfer to the Gyeongchun Line and get off at Gapyeong Station. This should take about 1,5 hours if you get your transfers. You can check out your exact travel route on Seoul metros route planner. After you get to Gapyeong station you have to take a bus or taxi to the Ferry station. The shuttlebus is a little more expensive, but you can hop on and off as many times as you’ll like. The same shuttle bus takes you to Petite France, The Garden of Morning calm and several other destinations in the area. After you get to Ferry station, you need to get across to Namisum Island by ferry. The ferry ride is included in the entrance ticket to Nami Island that cost 13000 won. You can return with any of the ferries throughout the day.

If you go to South Korea, don’t forget to visit Busan, a large port city in South Korea that is known for its stunning views, beautiful beaches, as well as villages with a splash of colour. As I had just one day remaining, so I preferred to visit Busan before going back to my country. it’s only a two hour and a half train ride from Seoul. From Seoul station, you can purchase the train ticket in Korail counter or you can book from Korails homepage .

Here below the places I visit during one day trip in Busan.

Oryukdo skywalk is a transparent glass bridge that extends over the cliffs and leaves you feeling like you are ‘walking in the sky’ as you are immersed by the brilliant blues of the seemingly endless ocean and sky. Before entering the horse-shoe shaped bridge, visitors will be given shoe covers to protect the glass from scratches and dirt. This skywalk surrounded by the magnificent views that really a feast for the eyes and made the trip here well worth it despite being slightly out of the way. 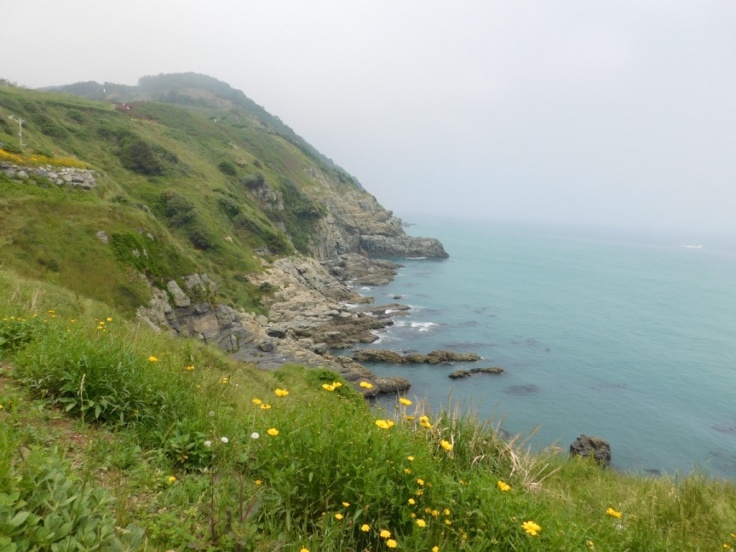 Located at the southern tip of Korea, Busan is a heaven for seafood lovers. So, you must visit Jagalchi Market, Korea’s largest seafood market where you can find endless rows of fish, clams, crabs and other seafood on display. This market open from 5am, and the dish you must try is sannakji, sashimi made from octopus feet which still moving.

Gamcheon Cultural Village is known as the Santorini of Korea. This village has a delightful maze of colourful murals, winding alleys and quirky sculptures. it’s the best spending an afternoon there, wandering through the picturesque neighbourhood of brightly painted houses on scurrying alleys and stairways.