One Day in the Most Romantic City, Paris

After I spent 3 days in Nottingham, I planned to explore some cities in Europe with my friends. We planned to visit Paris, Milan, Wien, Budapest, Prague and Berlin by the train. We already made the itinerary since 2 months a go and we wished nothing happened badly. As we planned first, we would go to Paris by Eurostar train from St. Prancas, London, so we went to London first from Nottingham by the bus. After arrived in London, we should go to St.Prancas by the subway, but something bad happened, the subway station was so crowded, it was so hard to step into the subway. When I want to step into the subway, the subway door was closed which is my two friends were already in the subway. On of my friend pointed her forefinger to the back, I thought she wanted me to get the next subway, so when the next subway arrived, I got into the subway and hoped we would meet in St.Prancas. When I arrived in St. Prancas, I didn’t see my friend there. I wanted to call them but there were no wifi and I had no London phone card at all. Then I explore St. Prancas station to get wifi and expected to meet them there. It almost 2 p.m the train to Paris no longer departed, I had no idea, I went to the daparture gate and thought if my friends already waiting in the departure lounge. Poor me, the scanner couldn’t read my ticket barcode, the officer said that I was late, because the check-in time was 30 minutes before departure so I should buy the ticket for the next train. I really had no idea, I didn’t know what to do, I should buy the next train ticket or stayed and searched hotel in London alone. But when I was so hopeless in front of the gate, suddenly there was a wifi signal in my phone and directly I called my friends. There were no answered, then I texted them but it was the same, no responsed. Some minutes later, one of them finally responsed me. Oh god, we had miscommunication, my friends searched me back to the first subway station, the pointed forefinger meant she would go back to the station, not asked me to take the next train. We finally met in St.Prancas and I was so happy met them again. Afterwards we went to the ticket office, we tried to change our previous tickets with the next train tickets without bought it again. God blessed the officer who give us the tickets, he was so kind and nice that just give us the next train tickets free. Thanks God, finally we got the train at 3 p.m and we continued our journey to Paris. We hoped there were no drama again along our trip. At 7.30 p.m our train finally arrived in Paris Gare Du Nord. We were so tired but exciting. Then we went to our hotel by the metro. The metro was so crowded with people who just got back from their work. After cheked in, we put our luggages and belongings in the hotel room then we dressed up and ready to go for dinner and visited Eiffel tower. After already dressed up, we took a walk from our hotel to the metro station near the hotel. the weather was so warm, we really enjoyed our walk. I like to observe people in the metro, maybe they were not so friendly but I like french people. the women were so stylish, the men were so handsome. I really love their face, they had a sharp jaw and deep eyes. They also so sexy when they talk in french accent. After some minutes took the metro, we arrived at Champ de Mars. We were so exciting that we could see Eiffel Tower near the metro station. I felt the romantic atmosphere there, then we took some pictures as this was our first time to see Eiffel Tower from our eyes.

After took some pictures, we took a walk to see some restaurant for dinner, we were so hungry at that time. No longer, we found the restaurant for our dinner. First, we thought the food was not so good for asian taste, but that was wrong! The food was so good and we liked it very much. The waiter also had a humor, my friend got a sudden back hug from him. 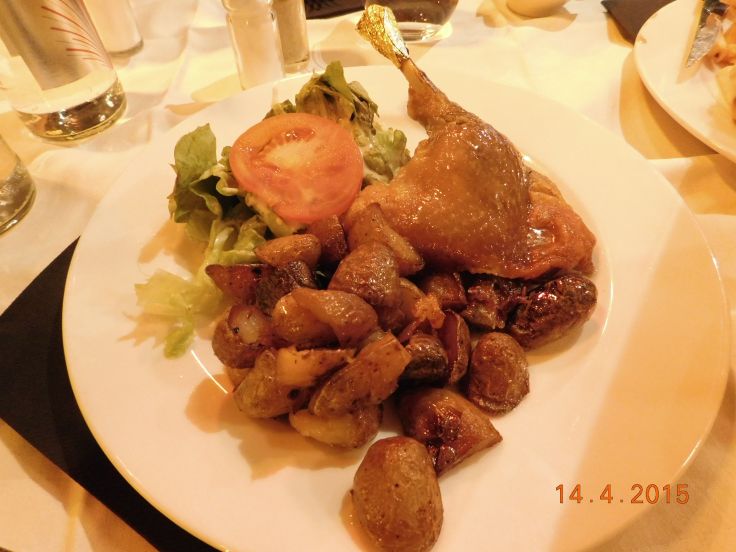 Enough with the inner, we continued our walk to Eiffel tower not far from our restaurant. We couldn’t wait to see the romantic nuance of Eiffel Tower in the night. What an excitement we got after no longer took a walk and we saw Eiffel Tower so close with us.

We spent our time in Eiffel Tower until midnight. We thought it was enough, we should back to our hotel, because tomorrow morning we should go to Milan. One day in Paris was not enough, I wished I could back here someday with my future husband, spent the most romantic ambience here.