The third day in UK, I realized I had never explore Nottingham, so I decided to spend my last day to explore this city. Nottingham is located in the east midlands of England, you need 3 hours from London if you want to visit this city by bus. This city was quite calm and far from crowdedness, but it doesn’t mean you can not find entertainment here, there are some clubs, theaters and live music venues here.

Today me and my friend, Chika planned to go to the city centre, We want to do some shopping there. Nottingham city centre was quite crowded, but not as crowded as London. There are some boutiques, sport stores, beauty stores and many more. Our first stop was sport store, my boss wanted me to buy his favorite Nike shoes. After visit some sport stores, poor him I didn’t get the Nike shoes he wanted, so We moved to another store. Our second stop was Boots, a beauty and drug store. My friends in Jakarta wanted me to buy some skin cares and their favorite lipsticks like Rimmel, Mua and Bourjuis which cheaper here and I also bought some for myself too. After exploring some shops, We felt so hungry, then Chika suggested me to get lunch in korean restaurant. I forgot the name of the restaurant, but the food we ate was awesome althought it was so hot and spicy, or maybe because I missed asian food in that time. After had a lunch, we went to poundsland, a british variety store chain which sells most items in its stores for £1. I bought some snacks and chocolates there for my family and co-worker in Jakarta. Afterwards we did window shopping, actually I wanted to buy ankle boots, but I got nothing, there were only limited model of ankle boots I saw because of the end of the winter, so we decided to end our window shopping. 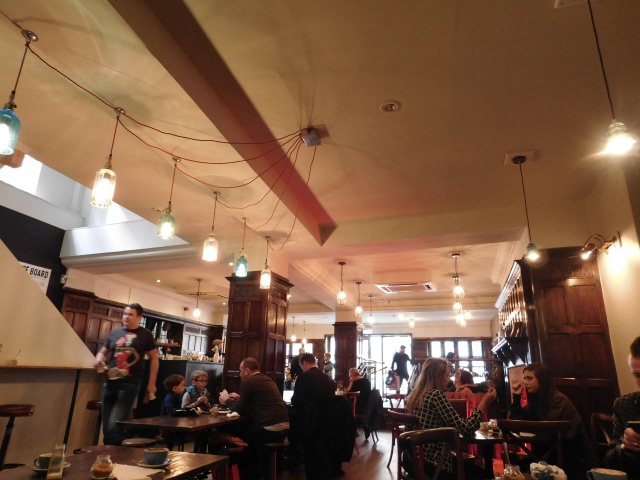 By the way, Chika had an appoinment today with her friend, Icha who would join eurotrip with us tomorrow, so we would meet her at the centre point of Nottingham city centre. After met Icha, we walked to coffee shop near the place we met, called 200 Degrees Coffee Roaster. This cofee shop was Chika’s favorite, she periodically visited this coffee shop to do some campus assignments or just did some chit chat with her crush. I agreed with Chika about this coffee shop, the place was so cozy and I felt like in middle era of England. We ordered coffee and hot chocolate, then we talked about our plan to do eurotrip tomorrow and we were so exciting in that time. Our arrangement of eurotrip was done today, then we planned to back home and did some preparations.

Before back to Chika’s flat, we need to go to Chika campus, University of Nottingham to make some copies of our passport, in case we lost it. The campus was near from her flat, we just need to take a walk some minutes. I enjoyed our walk, there were some typical of british houses along the way which made from bricks and woods, unlike asian houses. When we arrived at University of Nottingham, I adored this campus. The campus reminded me of my previous campus, University of Indonesia. The place was so quite and tranquil with the lake near the building which had some ducks swimming and laying around. After got our copied passport, we went back to Chika’s flat, but before we touched down, we thought we need to buy some food for dinner, so we visited White Horse, a halal restaurant near Chika’s flat. We bought kebab there which had a big bite size. After got our dinner, finally we went to Chika’s flat. We need to took a rest soon, besides our exhausting day we need to prepare our energy for the long journey tomorrow.